Tomb Raider: Secret of the Sword 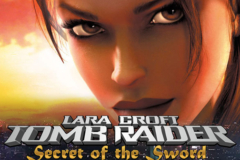 Tomb Raider: Secret of the Sword Slots is a 5 reel 30 pay lines game. Bets can be place as from 0.01 to a maximum of $3. This game forms part of the Tomb Raider Franchise. The interesting feature is that of the numerous bonuses and free spins that it features which accounts for the […]

Tomb Raider: Secret of the Sword Slots is a 5 reel 30 pay lines game. Bets can be place as from 0.01 to a maximum of $3. This game forms part of the Tomb Raider Franchise. The interesting feature is that of the numerous bonuses and free spins that it features which accounts for the high pay out percentage. It has the usual combination of wild, scatter and bonus triggering symbols. Some of the bonus rounds include Global Adventurer and Super Mode and Free Spins amongst others.

To get free spins, players simply have to spin 3 to 5 key symbols. It can appear on any reel and will trigger the 10 free spins along with the Rolling Reel feature which eliminates the winning symbols to replace with other symbols that can generate additional winnings. Each consecutive win increases the multiplier up to a maximum of 5 times. The Global Adventurer and Super Mode bonus rounds cannot be triggered during the free spins round.

The Super Mode is triggered at random and making players eligible to receive 5 free spins. Lara Croft appears and shoots multiple positions on the reels which turns them into Wilds and stay in place for the duration of the bonus round.

The next bonus feature is the Global Adventure Bonus round which is triggered with the activating all five reels. The reels are activated by the Passport Icon appearing in the middle reels. Once a reel has been activated; the game keeps track of the wager made until the final reel is activated and the Bonus round begins. Each reel will be accumulated until all 5 are activated which then opens up the Global Adventure Bonus. The value of the bonus game will be calculated based on the average bet since the first reel was activated. During this bonus, players have to visit 5 cities scattered over the world including Tokyo, Nepal or London amongst others. In each city, slot players have to find the pieces of the hidden sword. They can either get points or stumble on traps. Should any slot fan encounter 2 traps then the bonus round ends.

To make this bonus round even more fun, the Hidden Treasure feature is also available. While looking for the hidden sword, players can find the hidden treasure which includes a 2x multiplier, a bonus value or entry into the Shootout Bonus. In the Shootout Bonus, fifteen golden disks each have different points are displayed and reshuffled. Players should choose one which will ultimately be their winning.

Auto spins and the ability to change the coin denomination, the number of pay lines are as well are available to create a great gaming experience.