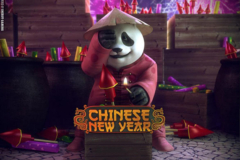 Chinese New Year Slots is a 5-reel 30-payline video slot machine themed around the magnificent fireworks used during Chinese festivals. The symbols in Chinese New Year Slots are a multitude of fireworks and the friendly panda and dragon on both side of the game screen add a good-humored touch to the atmosphere. The wild symbol […]

The wild symbol in Chinese New Year Slots is a bunch of star-studded fireballs and substitutes for all other symbols except the scatter and bonus symbols to complete winning combinations. The wild symbol is available on reels 2, 3 and 4.

A unique feature which can be found in Chinese New Year Slots is the Extra Cash Bonus game which is triggered when three Extra Cash Bonus symbols appear on reels 1, 3 and 5. Players are simply treated to extra bonus cash which is hidden behind the three symbols.

When three red firework symbols appear on an active payline, the Surprise Bonus game is launched and players are required to pick amongst three trunks in order to win free spins and multipliers. The bonus symbol only makes an appearance on reels 1, 2 and 3 and a good number of free spins can be won during this feature.

Chinese New Year Slots offers a Double Up Feature which gives players the chance to double every prize they win. During the Double Up game, players need to deduce whether the next number to be drawn will be odd or even. The panda rolls three dice and players receive double the amount of their win if their guess is correct.

Chinese New Year Slots is a colorful and entertaining online slot game which offers players a good many chances to win.